SOLD:Lourmarin Village House with a View

Asking Price: 495,000€ (agency fee included)
The price also includes an estimated 20,000€ in furnishings. (This reduces the listed price on the deed and reduces your notarial taxes and fees.)

See videos of the property here

This is more than a just a classic Village House with a view.

First off, it’s in the very heart of the charming village of Lourmarin, one of the region’s most desirable enclaves and ranked among the most beautiful in France. Located between two valleys, the Durance and the Calavon not far from the town of Apt, the village is located at the entrance of a passage dug by the river Aiguebrun in the limestone mountains of the Luberon. Famous international figures have been drawn to Lourmarin, such as French authors Albert Camus and Henri Bosco (who are buried in the village cemetery), as well as English author Peter Mayle (“A Year in Provence”), who helped bring world-wide attention to the area. The village can also boast of gastronomic delight with Reine Sammut’s Michelin Star restaurant, Auberge La Fenière, and there are no less than four other Michelin-starred restaurants within a 15-minute drive. Punctuating the village’s landscape is the 15th-century Château de Lourmarin, reminding us all of its aristocratic heritage.

The Luberon is a region of France of special note. With its abundance of olive trees, vineyards, fruit trees, lavender fields, and surrounding hills, Lourmarin is as close to paradise in Provence (or just about anywhere) as you will ever get. It serves as an ideal base for visiting Aix-en-Provence, Avignon, Arles and the villages of the Luberon and beyond. The famous port city of Marseille is less than an hour’s drive away. Marseille (international airport), Aix-en-Provence and Avignon provide fast and easy access to Paris (3 hours) by way of the TGV (Train à Grande Vitesse) rail lines.

The ancient stone house, one of the oldest in the village, sits at the top of Lourmarin on rue de Panier. It has an expansive rooftop terrace filled with earthen pots and plants and a covered dining area on which you could perch for hours on end taking in the breathtaking views of the Château de Lourmarin, the valley and hills of the Luberon. Built into the rock, remnants of which are inside the house, you can actually access the summit of the town from the terrace!

Unlike most village houses in Provence, you can drive a car into its gated space in the front of the house on the ground level courtyard. This alone is a big advantage because you’ll want a vehicle with which to explore the beautiful region when you’re not languishing in the house or on the terrace.

Up one short flight of stairs is a balcony overlooking the courtyard and the main entry to the house. On this level is a roomy master suite with a bathroom (shower) en suite and an adjacent office with mezzanine –– the kind of “nest” in which a writer can easily dream and pen eloquent passages.

On the other side of the hall, you’ll find a second bedroom with an independent full bathroom (with a tub) and a third windowless small bedroom or office…or whatever you wish to make of it.

Head to the third level up a staircase walled with stone –– this is where life is seriously worth living. First, you come to a large one-time kitchen, now more used as a laundry room, with the potential of being much more. Just a few steps further and you will land in the large main eat-in kitchen that has immediate access to the terrace and outdoor dining.

Head steps to the adjacent wing on this same level and you will find a dining room and further on is a spacious living room with large windows and magnificent views of the landscape at your toes. Centuries-old beams are exposed throughout the house, as is the original stone.

Under the main living areas, on the ground level which has two separate entrances, you’ll find four vaulted-ceiling rooms that would make a perfect artisan’s “atelier” (workshop) with a toilet and two sinks. Two of the rooms are very large and two are smaller, each of which could be used in different ways.

Accessible from these rooms as well as from the street is a two-level apartment. This is the perfect spot for a caretaker or the artist whose atelier is at his elbow.

Keeping the house cool in the summer and warm in the winter is easy. There is a mini-split air-conditioner/heat pump in the living room, and in other rooms ceiling fans and portable air-conditioning units throughout keep it cool in the dead of the summer heat. The stone structure and thick wooden shutters keep the house comfortably cool most of the year. The total surface area of the house is 200m2 with 160m2 considered habitable (rooms with no exterior opening are not considered habitable).

As an organic form shaped by the cliff itself, there are a number of quirky aspects of this house that a creative thinker would turn into amazingly wonderful attributes. No, there’s nothing quite like this particular village house. 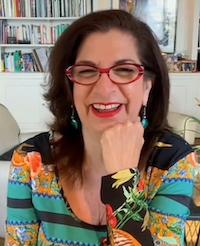