SINFULLY LUXURIOUS ON THE FAUBOURG SAINT-HONORE

My hair stylist was a 30-second walk away from home until he moved to the company’s chicest location on rue du Faubourg Saint-Honoré (No. 52, Coiff1rst). The salon on rue Debelleyme (No. 39, 3rd arrondissement) was just a simple little spot. Stylist Christophe Monteiro made everyone feel comfortable there while doing a great job of cutting, coloring, and styling. I’d show up about every three months. While it’s very convenient to have a 30-second commute, I wasn’t quite prepared to find another hair stylist, so in the freezing cold weather Friday I hopped the Métro to arrive at the Eglise Madeleine and walk down rue du Faubourg Saint-Honoré to their location, set way back in a courtyard. Along the way are some of the world’s most expensive luxury designers stores: Chanel, Prada, Lanvin, Hermès, Gucci, Givenchy, Yves Saint-Laurent…to name just a few. While many of these same brands have outlets near my apartment in Nice, I’d somehow forgotten how terribly fashionable Paris actually is. This district (the 8th arrondissement) is very, very different from Le Marais, even though Le Marais is home to many of these same boutiques. The atmosphere in Le Marais, as in Nice, even with many of the same designer boutiques, is not at all as ostentatious as those situated along rue du Faubourg Saint-Honoré.

More than two kilometers long, rue du Faubourg Saint-Honoré is undeniably one of the most luxurious and chicest streets in all of Paris. Parallel to the avenue des Champs-Élysées, it extends the rue Saint-Honoré, starting at rue Royale, and ending at Place des Ternes. As you stroll along, you can discover not only luxury goods, but sumptuous private mansions from the 18th and 19th centuries: the Palais de l’Élysée (headquarters of the President of the French Republic), the Hôtel Beauvau (headquarters of the Ministry of the Interior), the residence of the American Ambassador and that of the British Embassy. It’s a world into itself. I walked quickly down the swank street to Coiff1rst, so as not to spot anything in the boutiques’ windows I might not be able to live without. Of course, there is nothing there I can afford, anyway—not without selling my apartment! When I arrived at Coiff1rst, admittedly, I didn’t know what to expect, but certainly didn’t expect the enormous and beautifully appointed space that could easily accommodate dozens of clients and hair stylists. Despite its space, I was the only customer and in Christophe’s capable hands and was treated like royalty. I felt like royalty, too, but not having paid a penny more than if I had been at their rue Debelleyme location.

RENEE JACOBS AT SINNER…WITH HER SINFULLY BEAUTIFUL PHOTOS OF WOMEN Emmanuel Sauvage of the Evok Collection and Anatole Desachy of Galerie Les Yeux Ouverts presented a new solo exhibition—“Dreams & Desires”—by renowned photographer Renée Jacobs at Sinner Paris. Sinner seems out of place at its rue du Temple location. It considers itself a luxury hotel that breaks the rules…whatever that means. For one thing, the rooms are equipped with novels to read and vinyl records to play. One suite offers a hot tub. There’s a cosmopolitan restaurant, and a chic cocktail bar with stained-glass windows. A spa has a communal bath. Breakfast is available, as are personal trainers. It’s here that Renée’s provocative female nude photos are displayed throughout the lobby. Renée and her partner, Wendy, were on hand with an open bottle of champagne and surrounded by prints for sale as well as her books. I first met them both when we taped a House Hunters International together, “Living Large in Languedoc” in 2017. As a collector of fine art photography, I have always admired and appreciated her work…of female nudes. Women are her subject. She didn’t start out doing this—she was once a civil and constitutional rights lawyer in the United States, before picking up a camera and discovering the beauty of the female form. Her accolades are many—she won the International Photography Prize (IPA) in 2008, and was a photojournalist for The New York Times and Philadelphia Inquirer, with some of her photographs in the collections of the John F. Kennedy Presidential Library and Museum. She can also boast of many books of her own as well as others and magazines that pay tribute to her work. Women never looked more beautiful. The Dunhill Women’s Workshop, hosted by Anya Berezow, a Certified Financial Planner™ at Dunhill Financial, in which I participated last week is online and ready for viewing. Anya has over a decade of experience in the investment/banking industry. As an American Expatriate herself, she enjoys assisting other Americans who made their home outside of the US. Just one hour of your time is all you need to see and hear it from start to finish. Find out more and get in touch with Anya at Dunhill Financial.

HOUSE HUNTERS INTERNATIONAL—HOT ON OUR EPISODES

Last week, our latest episode of House Hunters International aired for the first time: “Learning a Thing or Two in Lille.”  Visit HGTV to watch your favorite episodes on demand or click here to connect directly to this episode. 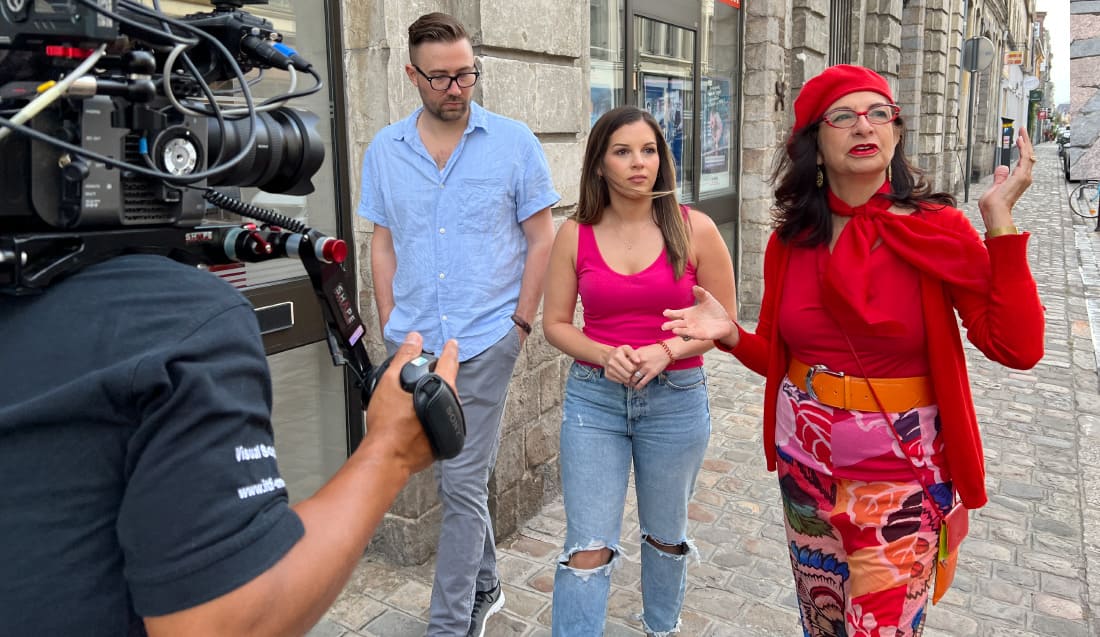