From Making Plans to Conjunctive Planets

One hot August evening, too many years ago to remember, my daughter, Erica, called to me from her bedroom on the opposite end of the apartment.

From her windows, she had a perfect view of our neighbor’s tiny studio apartment across the street as she showed slides of her trip to the Grand Canyon on a big screen to a group of about 10 or more. We watched the slides in awe as the scenery was amazing, but even more astounding was her ability to fit so many friends into one tiny apartment. Her slide show featured a goat every few slides…puzzling us and adding a humorous side to the slide after slide after slide of the Grand Canyon. I later learned that mountain goats are well-known fixtures in the park and in the canyon, so it made sense to her, but not to us as we watched from across the street…a goat popping up every few slides.

I think that was the moment I realized that I might be the only person on the planet who hadn’t seen the Grand Canyon (or at least in the U.S.) and it was also at that moment I decided a trip there needed to be relatively high up on my “bucket list.” With the Covid-19 pandemic and an inability to see friends and socialize while in Los Angeles visiting Erica, a trip to the Grand Canyon was the perfect opportunity for us to take a few days to tick this one off the list.

If you read Monday’s Parler Paris Nouvellettre®, then you already know that we started off the journey from Los Angeles to Lake Havasu on Sunday as our first overnight stop. Then, Monday morning bright and early, on December 21st, known as the Winter Solstice (the shortest day of the year), we drove straight along the historic Route 66 to the Grand Canyon National Park, with one stop in the town of Williams for another American-style breakfast. It seems we couldn’t get our fill of eggs and hash browns…at least not so early in the game. Erica was determined to arrive at the Canyon that same day, the 21st, in time for a once-in-an-800-year phenomena. As it turns out, the two largest planets in our solar system, Jupiter and Saturn, aligned with one another creating what is known as the “Christmas Star.” The last time these two planets got this close was in the year 1226, almost 800 years ago. Coincidentally, the event was showcased live by the Lowell Observatory in Flagstaff, Arizona, where we happened to be staying that very same night! The South Rim of the Grand Canyon National Park remained opened to visitors. Normally a $35 entry fee per vehicle, for some reason when I asked about a senior discount that was posted at the entry, the Forest Ranger at the gate asked, “How about if we just make it free today?”…to which we replied, “Seriously? Of course! Thank you!” He handed us the usual brochures and motioned us in. (Honestly, I don’t have a clue why the young fellow was so generous to us!)

Seeing the south rim doesn’t take too much effort. You can drive from one look-out point to another. There are some hikes along the way should you decide to do that, but we maximized our daylight hours by driving. There is no way for me to ascertain whether the park was heavily visited or not that day, but there were no crowded areas, parking was easy and we never felt in any danger of Covid-19 whatsoever. People wore masks when they stepped out of their vehicles to admire the scenery, but a park in the open air is as virus-free as any spot on the planet could possibly be. The Canyon is every bit as breathtaking as I had always imagined. But, I doubt I need to tell you that…since I am the only living human who hasn’t seen it before now! It was a gorgeous day. The skies were blue, blue. We both took a zillion photos, as I am sure everyone does, even realizing that it’s tough to capture on camera. Looking out over the rock formations, one realizes how insignificant we really are…just like grains of sand on a beach compared to the vastness of the landscape that seems to have no real explanation. It does, however, of course. Scientists will tell you that the Colorado River carved the canyon over a course of five-to-six MILLION years. Can you imagine? I can’t. (To learn more about it, visit nps.gov.) My daredevil daughter climbed over the stone barriers and out on a rock, which might have given a normal parent a heart attack, but I’m a bit used to her bold feats and ability to land on her feet. I wasn’t as brave, however, and stayed on the right side of the stone barriers without tempting fate. One full afternoon was actually enough Grand Canyon for us, so as the sun came down and the lighting changed on the canyon rocks we headed to Flagstaff for our overnight in an Airbnb, take-out sushi and relaxation while we followed the Christmas Star online as the planets coincided. I can’t say Flagstaff was much to write home about. We stayed in a brand-new one bedroom apartment in downtown Flagstaff—a part of town clearly on the rise, but still feeling the pains of its past. In the 1970s, downtown Flagstaff became an uninviting place as many businesses started to move out of the area, causing an economic and social decline. Redevelopment began in the 1990s, but there was still enough homelessness in the area to make us feel a bit uncomfortable. We opted on cutting short our stay there by one night to spend more time in Sedona.

The drive to Sedona from Flagstaff is like going from night to day in a matter of minutes. Surrounded by red-rock buttes, steep canyon walls and pine forests, the town is an oasis in the desert with a mild climate, a vibrant arts community, new age shops, spas and art galleries. We landed at the Casa Sedona Inn, an elegant hotel in a residential neighborhood of Sedona, that was ranked #6 on the “Best Romantic Hotels in the United States” in 2020. Clearly we girls weren’t there for the romance, but no one was arguing with the beautiful view from the well-appointed room, with its immediate access to a large terrace, a triangular Jacuzzi tub for two in the bathroom, and working fireplace. Not far from the hotel we discovered ChocolaTree “Organic Oasis”—a restaurant, garden and marketplace where “Each dish is created using 100% organic, vibrant foods, gluten-free and entirely home made.” Yes, it was delicious and healthy if not inexpensive. Welcome to Sedona.

Erica has been dreaming of doing some serious hiking while we’re in Sedona. Her idea of hiking and mine are distinctly different. She enjoys challenging trails that take her several miles and clock several hours, while I’m a city stroller who prefers window shopping with a café nearby where one can get a drink and rest one’s feet. But, I agreed to do the best I could. So, we started out with a beginner hike taking us 1.2 miles along the Fay Canyon Trail to massive boulders and buttes on which one could climb further. The earth along the trail was a pink dust, almost like sand, but not grainy. Fortunately I was prepared with the right shoes, however, I looked like no one else on the trail. While just about everyone was in typical hiking gear—comfortable pants, fleece or puff jacket or vest, with a small backpack for essentials—La Parisienne (me) was dressed in a long black coat with cut velour scarf, velvet beret and tactile gloves, looking like I had been dropped in from another planet. (Jupiter or Saturn, maybe?) 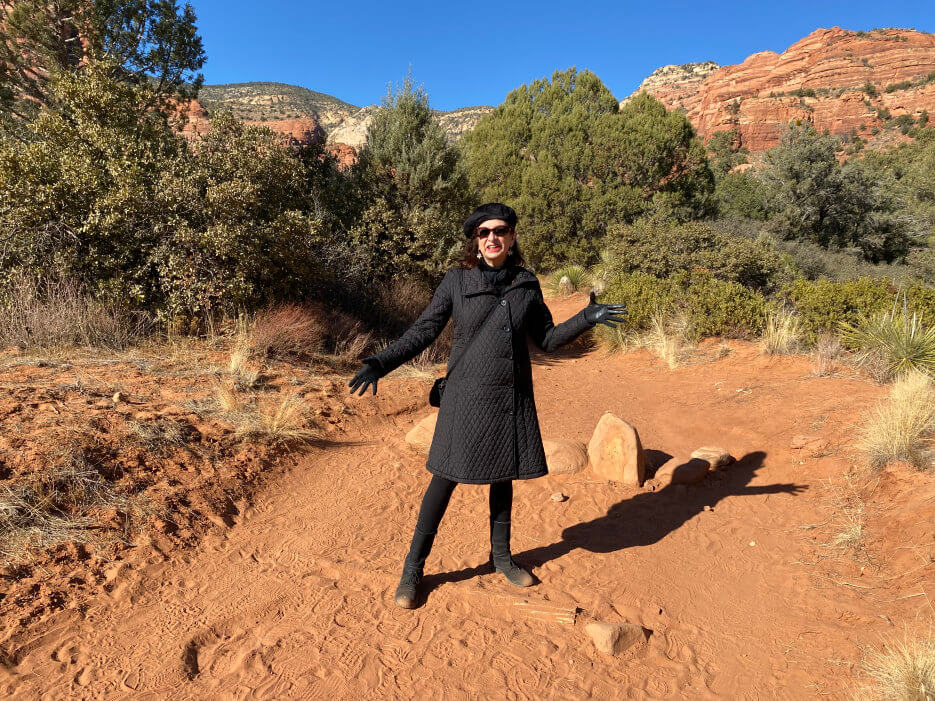 For later today and tomorrow, Erica has mapped out one or two “butt kicking” hikes for herself, while I’ll find something else to do…like get a massage at a spa or go do the laundry (starting to become important to do)! The other option is to take another light trail with her “little old lady mother” who isn’t interested in “kicking butt.”

Merry Christmas to all! Adrian at the Grand Canyon – photo by Erica Simone

P.S. While many of you will be streaming Netflix, Hulu, and Disney+ for the holidays, you can also binge on three of our recent House Hunters International episodes! Visit our HHI page for details and links to the episodes on HGTV for “A Parisian Place for Mother and Daughter,” “From Vancouver to the Vineyards of Epernay, France” and “The Good Life in Paris.”