FOR SALE: A Bijou Studio Apartment in the Oldest Building in Paris! Properties like this come available once in a lifetime. I first came to know the building in the summer of 2010, when one of our best real estate agents called to ask, “How would you like to be the first to see an apartment for sale in one of the oldest buildings in Paris?” (There are three buildings that make this claim.) Naturally, not only did I agree, but I RAN to meet him at 11-13, rue François Miron. The Middle Aged structures stand out from the adjacent architecture and reek of old-world charm. They are impossible to miss. Tourists stop to regard them every few minutes all day long. At the very heart of Old Paris, these two houses have been estimated to date from the 14th-century. The structure is of wood, composed of solid wood beams and pillars often carved out of one tree. The walls were completed by filling the gaps between the structure with unbaked bricks, plaster, or cob. After the 1666 London fire, Louis XIV imposed plaster coating on all facades in order to avoid, or limit the propagation of a potential fire. The wood was thus covered for several centuries before being uncovered sometime in the 20th-century. These houses have been transformed many times, notably in 1967 by the architect R.Hermann.

On the façade of the first house, one can read “à l’Enseigne du Faucheur.” As for the second house, it is “l’Enseigne du Mouton.” Very different from the Parisian buildings, these houses make it easier to imagine the question of housing in the Middle Ages. Here, the building is composed of narrow facades, quite high where wood takes an important place. For the record, François Miron was the provost of the merchants from 1604 to 1606.

Inside these famous 14th-century half-timbered houses, which are two combined to make one apartment building, the hallways have been modernized and an elevator added. The apartment, a studio of a mere 15 square meters (161.5 square feet) on the second floor (European, therefore two flights up), has exposed beams and half-timbered walls. Completely transformed a few years ago by Interior Architect Martine di Mattéo, this “bijou” lacks nothing and while furnished contemporary in style, is still oozing with old-world charm. Just steps from the Hôtel de Ville and the River Seine, it has one big window overlooking the courtyard (quiet and peaceful), beautifully exposed and refinished beams and every amenity you would need or want for a few days, weeks, months or a lifetime. In other words, it makes a perfect “pied-à-terre” and rental.

As you enter, you will see the room reflected in the mirrored doors of a large closet providing ample storage. At the window is a classic café table with two chairs which are illuminated by a fun and fanciful chandelier. Opposite the sleeper sofa is a television and entertainment center. There is plenty of space to install a queen-sized bed should you prefer it to the sofa bed! The elegant gilded, but very efficient kitchen, is equipped with a refrigerator, washer/dryer, sink, combination oven/microwave and two-burner stove. The kitchen has an amazing amount of storage given its size. The luxurious and spacious bathroom offers a glass shower, large sink with vanity, heated towel rack and toilet plus a large storage cabinet hidden behind the door. All furnishings come with the apartment, so there is nothing for you to do, but walk in with your belongings and settle right in. It’s absolutely ready for immediate living! 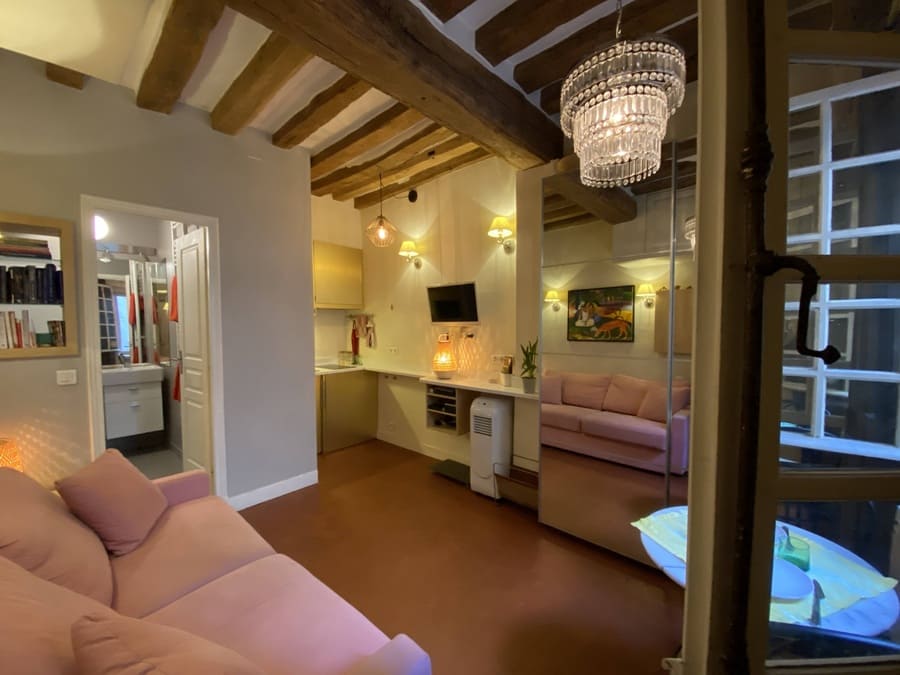 The apartment is equipped with…

Asking price, including all furnishings and agency fees: €369,000 P.S. This apartment is going to sell very quickly! I suggest you contact us immediately! The first to respond will be the “early bird who catches the worm!” Email the listing agent, Luz Diaz.

P.P.S. We had a fun-filled session at Après-Midi with author, Lynn Heyman. To read all about it, see photos and the recording, visit our site page.